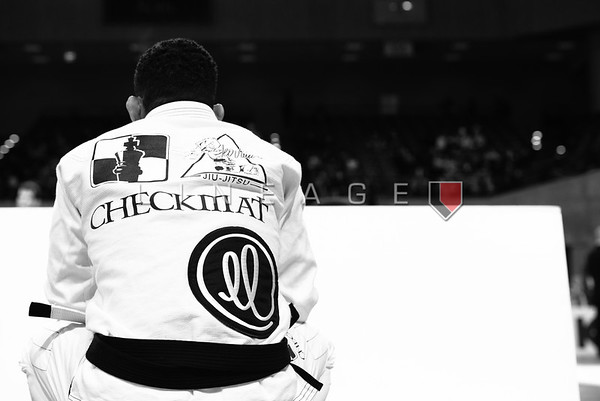 Driving to the Bren Event Center in Irvine, CA that Thursday brought back a flood of memories. Now, I had attended this tournament AFTER I stopped shooting, but this was to be the first day of a 4-day shoot. Granted, I didn't arrive until the afternoon but the excitement and nerves were still there.

I always get a little nervous before shooting. I don't know if I still don't quite trust my ability to capture an image or if it's normal "competition" jitters. Anyway, it felt great.

Due to arriving late to the venue, parking was ridiculous. I had to park in San Diego and walk to the Bren Event Center (well, that's what it felt like anyway). If this was the worst of my problems for the day I was doing pretty good.

After getting checked in and walking down to the mat area, I was immediately greeted by familiar faces. The most common question I was asked was, "So, are you back?". To which I replied, "We'll see."

I chatted briefly with the other photographers but I was eager to start shooting. I set up my work area, got settled in and just like that.. I was back!

Now, in the past, I would be frantically rushing from mat to mat to captures as many matches as I could. I was betting on the fact that the more I captured the more sales I would make. While this did ultimately prove to be true, the "riches" I was seeking never came to fruition.

This time out I was going to be more selective about my shots. I was going to capture the moments that I felt were important, not what was going to "make me money". This gave me a new sense of freedom. No longer was I a slave to the sale. I was free to "wait" for a shot to present itself.

And so this continued throughout the first day. The real relief in all of this was that I didn't have to sort through thousands of photos at the end of the day. In fact, I was able to finish my edits and upload all of the days photos before I left the venue.

This was most beneficial to my clients who booked Dedicated Coverage. I had their photos to them almost immediately. This was something I had always strived to do in the past but was only able to achieve it now.

Friday was much of the same. Running into old friends and meeting new ones. I was surprised to find out that most people didn't know that Cooperfoto had morphed into Lineage Photos. So I explained the situation (maybe a topic for a future post).

After being away from the mats for some time, I was surprised at the level of talent at the lower belts. What was once two people flailing widely trying to pull guard has changed to more thoughtful approach and game plan (for the most part).

As for the higher belts it was much more of the same. Highly technical execution, exciting action  and amazing match-ups.

All of this reminded me why I love this sport. While not yet mainstream it has grown steadily over the years. New organization are popping up and providing a consistent stream of jiu-jitsu to satisfy the growing masses.

The most important result of this is the professional athletes finally getting paid. Where once they competed for the prestige, they now compete for prestige AND cash. Abu Dhabi, EBI, Polaris, and Fight 2 Win are just a few of the growing list of organizations that are paying the competitors.

So for me, as a photographer, my most important contribution to this sport is documenting history. I have had the pleasure of seeing some of the highest level competition from just a few feet away. Hopefully I have captured moments that will forever live on even after I'm gone.

Many people, athletes included, may not truly understand the importance of these photographs. They view them as a novelty or something they can post to their social media accounts for a few quick "Likes".

To keep myself from rambling on any further I will close with this. It felt really nice to be back on the sidelines again. I enjoyed seeing my old friends some of which I photographed as white belts. I enjoyed the rush of watching incredible jiu-jitsu.

But most importantly, I enjoyed being "back".